What is a Lab-on-a-Chip (LOC) or Micro-Total Analysis System (µTAS)?

The current trend for the simplification, miniaturization and automation of the analytical systems have given the named Lab-On-a-Chip (LOC) or Micro Total Analysis Systems (µTAS).

Microfluidics, the manipulation of fluids in channels with dimensions of tens of micrometres, can be also considered a part of the Lab-on-a-Chip technology that has developed continuously and became a distinct new field.

What is a sensor?

A sensor (also called detector) is a device able to measure a physical quantity and converts it into a signal which can be read by an observer or by an electronic instrument.

What is a biosensor?

A biosensor is an analytical device for the detection of an analyte that combines a biological component with a physicochemical detector component [+].

In case of using an electrochemical transducer, the biological recognition element can be immobilized in the electrode surface in order to get the biosensor. 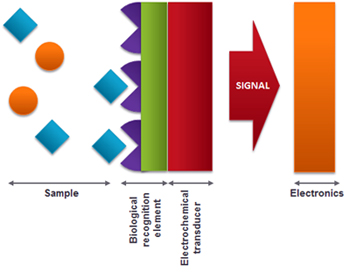 What is capillary electrophoresis?

Capillary electrophoresis is a powerful analytical technique used to separate ionic species with different migration times. It can be done due to the different charge to mass ratio of these species in a conductive liquid medium under the influence of an electric field [+].

This separation technique is useful to separate small organic and inorganic ions as well as biomolecules such as proteins and nucleic acids (RNA and DNA).

Microfluidic electrophoresis chips can be considered an evolution through the miniaturization of the traditional capillary electrophoresis technique. Thus, these novel devices are the first stage to get a “true” Lab-on-a-Chip (LOC) in which would be integrated all the steps of an analytical process.

What is a microfluidic system?

Microfluidics is an interdisciplinary field dealing with the behavior and control of extremely small volumes of fluids and the design of systems that use these small volumes [+].

Microfluidics, the manipulation of fluids in channels with dimensions of tens of micrometres, can be considered a part of the Lab-On-a-Chip (LOC) technology that has developed continuously and became a distinct new field.

What is a microchip electrophoresis?

Microchip electrophoresis (ME) is an emerging and highly promising method for fast analysis with minimum amount of analytes. Microchips electrophoresis can be enclosed as part of microfluidic and Lab-on-a-Chip devices.

What is the basis of electrochemical techniques?

Electrochemical techniques are based on oxidation and reduction reactions (electron transfer reactions) which take place on an electrode surface [+].

These systems have been widely used in micro- and nanotechnology. Moreover, electrodes are a very useful tool in the construction of (bio)sensors.

Voltammetry groups a series of electrochemical methods based on the measurement of electric current applying different potential ramps. Depending on the potential ramps, there is several voltammetric techniques such as:

Voltammetric experiments are performed with a typical three-electrode sytem that consist of a working electrode (WE), a reference electrode (RE) and a auxiliary or counter electrode (AE / CE) [+].

Amperometry is an electrochemical technique based on monitoring the electric current generated in a redox process with time. It is a very useful detection method in flowing liquid systems (FIA, CE, HPLC...) and microfluidics

Potentiometry usually uses indicator electrodes made selectively sensitive to the ion of interest, also called ion-selective electrodes (ISE). The most common potentiometric electrode, by far is the glass-membrane electrode used in a pH meter [+].

A variant of potentiometry is chronopotentiometry which consists in using a constant current and measurement of potential as a function of time. In these experimets is used a typical three-electrode approach in order to a best control of the applied current into the cell without affecting to measured potential.

What is electrochemical impedance spectroscopy?

Electrochemical impedance spectroscopy (EIS) is a powerful non-destructive technique for characterizing a wide variety of electrochemical systems and for determining the contribution of electrode or electrolytic processes in these systems.

The principle of this technique is to apply an alternating signal of small amplitude (5 to 20 mV) to an electrode inserted into an electrolyte. The initial disturbance (applied) and the response of the electrode is compared by measuring the phase shift of the current and voltage components and by the measurements of their amplitudes. This can be done in the time domain or in the frequency domain, using a spectrum analyzer or frequency response analyzer (FRA), respectively.

Thus, some of the advantages of EIS include:

Although, EIS data analysis can be very complex, it is a prowerfull tool with many promising applications including:

Photolithography is a process used in microfabrication to selectively remove parts of a thin-film (or the bulk of a substrate). It uses light to transfer a pattern from a photomask to a light-sensitive chemical on the substrate. These wafers are made on different materials: glass, silicon, quartz, polymers and also metals.

This technology is very useful in the manufacture of microfluidic devices as well as thin-film electrodes and microelectrodes.

What is a metal deposition process?

PVD is characterized by a process in which the material goes from a condensed phase to a vapor phase and then back to a thin-film condensed phase. PVD processes include sputtering, evaporation, pulsed laser deposition, electron beam deposition, etc... [+].

In CVD, the wafer (substrate) is exposed to one or more volatile precursors, which react and/or decompose on the substrate surface to produce the desired deposit. Frequently, volatile by-products are also produced, which are removed by gas flow through the reaction chamber [+].

The combination of photolithographic processes, metal deposition and lift-off enables the fabrication of electrodes and microelectrodes with high precision and resolution for using in microfluidic devices and sensors.

What is a lift-off process?

Lift-off process in microstructuring technology is a method of creating structures (patterning) of a target material on the surface of a substrate (e.g. wafer) using a sacrificial material (e.g. photoresist). It is an additive technique as opposed to more traditional subtracting technique like etching. The scale of the structures can vary from the nanoscale up to the centimeter scale or further, but are typically of micrometric dimensions [+].

What is an etching process?

Etching is used in microfabrication to chemically remove layers from the surface of a wafer during manufacturing. Etching is a critically important process module, and every wafer undergoes many etching steps before it is complete. Different processes such as wet etching or dry etching can be used for removing layers from specific wafer materials [+].

Wet etching processes use liquid-phase ("wet") etchants. The wafer is immersed in a bath of etchant, which must be agitated to achieve good process control. The selection of the solution (etchant) employed for this process is critically important. For instance, buffered hydrofluoric acid (BHF) is used commonly to etch glass substrates or silicon oxide based substrates.

Dry etching refers to the removal of material by exposing the material to a bombardment of ions (usually a plasma of reactive gases such as fluorocarbons, oxygen, chlorine, boron trichloride; sometimes with addition of nitrogen, argon, helium and other gases) that dislodge portions of the material from the exposed surface [+]. A common type of dry etching is reactive-ion etching (RIE) and deep reactive-ion etching (DRIE).

Unlike with many (but not all) of the wet chemical etchants used in wet etching, the dry etching process typically etches directionally or anisotropically.

What is a bonding process?

In microfabrication technologies, a bonding process involves the sealing of different open microestructures in order to get fully-closed devices. Different technologies can be used in this process such as thermal bonding, anodic bonding or adhesive bonding.

A thermal bonding process is used to bond two surfaces, usually the same material, by applying pressure and temperature close to glass transition temperature (Tg) of the material [+].

Anodic bonding is a wafer bonding process to seal glass to either silicon or metal without introducing an intermediate layer; it is commonly used to seal glass to silicon wafers in electronics and microfluidics. This bonding technique, also known as field assisted bonding or electrostatic sealing, is mostly used for connecting silicon/glass and metal/glass through electric fields [+].

Adhesive bonding (also referred to as gluing or glue bonding) describes a wafer bonding technique with applying an intermediate layer to connect substrates of different materials [+].

What product brands are provided by MicruX?

Users can browse throughtout our online catalogue in orde to find out more about our products and services.

What kind of electrochemical sensors are available?

Moreover, thin-fim (micro)electrodes can be easly integrated with a microfluidic stage in order to get more versatile devices for multiple applications.

What materials are electrochemical sensors available ?

Standard electrodes are provided with a insulation layer of SU-8 resin, in order to passivate the non-functional parts of the sensors, keeping open the electrochemical cell and electrical pads. Electrodes can be also provided without the insulating layer.

What materials are microfluidic chips available ?

Other materials can be studied under previous request.

Are available customized designs of microfluidic devices and electrochemical sensors?

Yes. Technologies available in MicruX enable the possibility of tailored devices to fulfill the requirements of customers. In this case, the price will be different to the standard devices. Anyway, we can elaborate a quotation without any compromise.

How is a purchase order placed?

What is the price of the products?

Registered users (by creating a free account) can check the prices of each MicruX' products directly in the online webstore. Prices shown in the online store are EX-WORKS and they do not include taxes, fees nor shipping costs. Shipping costs and taxes are included at the end of the purchase process.

You must enter a valid email.

The email entered is already subscribed to our newsletter.

Thanks for subscribing to our newsletter.